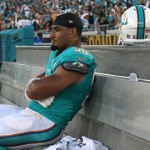 Should Vernon stay or go? We have come to the time of year where questions like this must be answered. It’s the time of year that all Miami fans look forward to, the off season.
Yes, it’s sad that this is where we feel our best because our seasons lately have been major disappointments. But here is where we can win. Where we can say that we went out and landed the big prize. Gave the big contract that will turn the franchise around….

Then reality sets in.

Landing the big prize in FA has not done a thing to help this franchise turn around. In fact, it has led to nothing but more disappointment & salary cap headaches. Early days of Free Agency usually lead to paying marquee dollars for less than marquee talent.

Part of the problem is that you are judging another team’s player. Watching the tape can tell you some things, but it can’t always measure a player’s work ethic, attitude, & intelligence among other things.
I have found in my experience following this league, that it is best to sign your own and supplement very carefully from outside. This thought process would lead one to believe that I am absolutely in favor of keeping & paying our own free agents this year, specifically Olivier Vernon.

You would be incredibly mistaken.

Word on the street is that his price tag is north of 12 million per season & I have read numbers as high as 15 million plus per season.

This for a player that finished 27th in the league in sacks last year.

This for a player that is a notoriously bad player on running downs.

This for a player that committed SIX personal foul penalties last year.

I understand that pressure cannot always be measured in sacks. But 7.5 sacks with Ndamukong Suh constantly commanding …read more

This site uses Akismet to reduce spam. Learn how your comment data is processed.